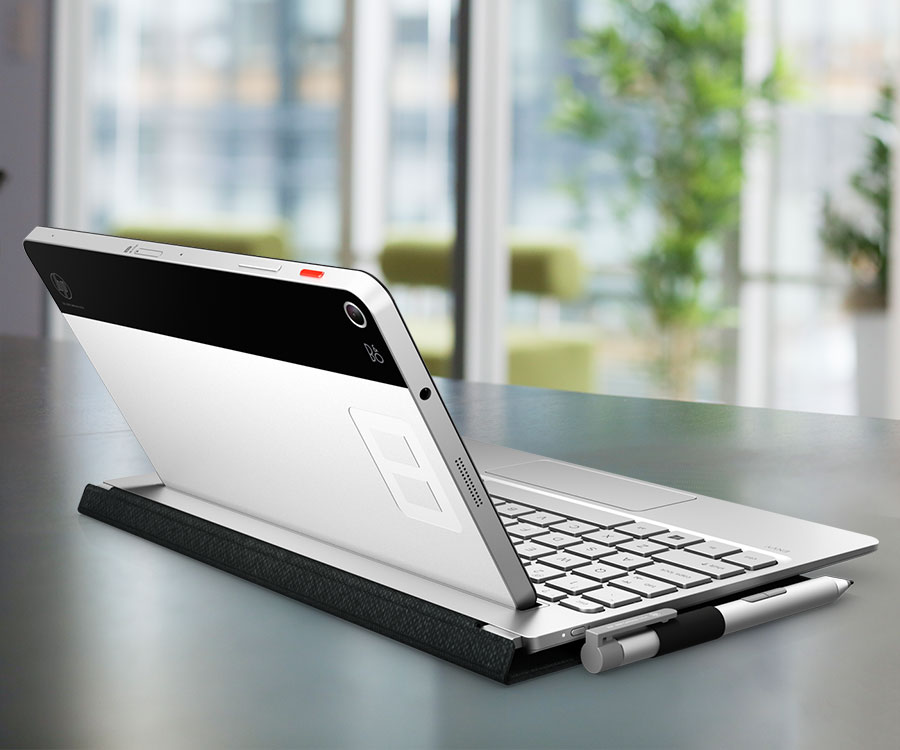 In today’s guide, I’m going to be reviewing the HP Envy Note 8 and its complete features.

So if you’re looking for a business or power focused device that is high on style to buy in 2021, one that can be operated in both tablet and desktop modes, then you’ll love this guide.

It’s comical to see the HP Envy Note 8, which is a tablet and has a keyboard stand at the same time.

Initially, it looks like a regular 8-inch tablet but upon closer inspection, it has a full-size keyboard stand with a 10-inch screen attached to it which is quite larger than the actual tablet.

When paired together, the entire assembly looks quite imbalanced and I can tell that this is one of the weirdest tablet-laptop hybrids I have ever seen.

The tablet still fully functions and runs Windows 10. It is well built and features a Corning Gorilla Glass 3 screen, but its design makes it less sleek.

On a more serious note, digital note-taking has never been a fun experience, even with the advancements in iPad styluses and cross-platform apps. The biggest underlying issue with digital note-taking is that it requires users to input everything manually through touchscreens, thereby making it tedious.

Another problem is that it is very easy to jot down a dozen reminders during the week, but by the end of the week, you have already forgotten why you wrote that quick note or picked up that website address.

Because of these reasons, I was unlikely to take an interest in HP’s latest stylus-focussed tablet, the HP Envy Note 8. But little did I know this tablet would come with some of the finest note-taking software ever created.

Taking a closer look at its specifications, the HP Envy Note 8 isn’t as impressive as other tablets, and most of its specifications are fairly standard. With a plastic frame and a 1,920 x 1,200-pixel display, the device doesn’t feel as premium as some others.

Below is a simple infographic breaking down the HP Envy Note 8 full specifications:

The HP Envy Note 8 isn’t an inexpensive, bargain tablet. It feels solid and packed with innovative features, despite being made of plastic. Its small dimensions and tiny weight of 0.8 pounds (362g) give you the illusion of being holding nothing.

Included in the fairly standard tablet features, is a Micro SIM 4G LTE slot taking advantage of its 4G modem for mobile internet, and a Bluetooth 4.0 for keyboard connectivity.

Display-wise, Its 1920×1200 display resolution is fine for a screen of this size, with the side having a power button, volume rocker, and a 3.5mm headset jack.

The Envy Notekeyboard has a Micro USB 2.0 port for charging.

When slid into the much larger keyboard, the Note 8 looks small, but it makes sense since it can either be laid horizontally or in portrait mode.

The keyboard keys are incredibly spacious, which is best for larger fingers.

It has a fabric panel over the keys, which can be flipped a full 360 degrees to serve as a stabilizing bottom base when in use. It can also be folded up to replace the regular keys.

Stranger still is that the tablet clips onto the metal underside of the Keyboard Folio. Its tethered position is nothing short of intriguing. It looks almost like a spaceship when the tablet is attached to its typing accessory.

Aside from the fact that it weirdly has a large-sized keyboard attached, the keyboard portfolio is a well-built, aluminum-made peripheral. Typing on it is more comfortable than using typewriters and laptops.

Despite my skepticism about the board accessory, HP’s note-taking software is extraordinary. The optional stylus allows quick access to shortcuts by initiating a radial menu when it is held near the screen as you press the side buttons.

A plethora of options appears within seconds, such as turning on the camera and selecting Cut-Copy-Paste.

Once you select the second option, you’ll be presented with a floating HP Notes window, which will disappear once you’re done.

When you click the third option, you’ll be taken to a page that displays your daily cliff notes in a timeline format.

The most incredible part is that HP’s notes app will also automatically log the activity that you were doing at the time, whether you were watching videos on YouTube or surfing the web.

This is a mere improvement, but it saves you the headache of recording all the things you did at the time. You can even import your notes from your OneNote and Evernote book.

The digital pen works fairly well, but not too accurate though.

Although it’s unlikely to catch on yet, at least this is an 8-inch tablet that is sold at a pretty reasonable price and can function as a mobile alongside a workstation.

Now I’d Love to Hear from You:

How To Delete Your Jarvee Account permanently And Without Any problems